Launched in September 2012, the emission-free Mercedes-Benz SLS AMG Electric Drive which is described as the ‘world’s most powerful series production electric car’ has now inspired the creation of “Cigarette AMG Electric Drive Concept” engineering design, the latest development of Mercedes-AMG and Cigarette Racing which will be launched at the Miami International Boat Show. Described to be the world’s most powerful and fastest electric drive powerboat electrified by Mercedes-Benz, the 38 foot long Cigarette AMG Electric Drive Concept with an output of 2,200 hp and a maximum torque of 3000 Newton meters is truly a fascinating new concept that cruises with a speed of 160 km/h. Cigarette Racing is however been working closely with Mercedes-AMG for several years, and has delivered impressive speedsters of the waters like the Cigarette racing boatsinspired by Mercedes Benz AMG Black series, the Cigarette 46’ Rider XPspeedboat, and the 46-foot Mercedes-Benz SLS AMG Cigarette boat which took its inspiration from Mercedes’ SLS AMG supercar, to name a few.

Concept Superyacht Xhibitionist by Gray Design is a Masterful Blend of Style, Purpose and Efficiency

Designed with very real, very modern and very useful applications in mind, here’s a cleverly engineered workhorse dubbed as Xhibitionist, a nautical tool that will fulfill many different roles of a luxury yacht. Partly inspired by traditions as old as seafaring itself, this no ordinary yacht concept is actually the brainchild of noted Swedish-based designer Eduard Gray of Gray Design, which earlier impressed us with their Superyacht Sovereign that has taken its design cues from luxury limousines, theDartz Prombron Nagel which is the world’s first sportback vehicle to act as a yacht puller, and the Standcraft limousine beach cruiser which had the designing mastery of Gray Designs. Described as a masterful blend of style, purpose and efficiency, this one-of-a-kind vessel’s hull is its most striking element, as the inverted triman configuration has been employed for one overriding reason that is stability. Further, this versatile concept superyacht boasting an Art-Nouveau styling has also been future-proofed in some aspects; both in terms of its actual features and its potential ‘lives’, as it were.

Excellence V is a beautiful luxury yacht by Abeking & Rasmussen, an elegant vessel that was launched in the spring of 2011. Its classy design was conceived by the owner himself, who worked together with Reymond Langton Design, a design firm from London. Even though it measures 60 meters (almost 197 feet) in length, Excellence V is able to offer flawless accommodation in spaces that are comparable in size to that of much larger yachts.

Almost all guest accommodation areas are located on the main deck: the VIP suite, 2 doubles and 2 twins. They are all situated fore, and are arranged in a perfect manner in order to make the best possible use of space. The master suite can be found on the upper deck, with an adjacent double suite. In all, there is plenty of space onboard for up to 14 guests, plus the crew team.

A beautiful staircase connects the five different decks of the vessel, but there is also an elevator in the central lobby, meant to ensure an effortless transition from on level to another. The main lounge and dining areas are located aft, featuring comfortable furniture and tasteful decorations. Adjacent to the lounge area with bar is the exterior lounge space with two L-shaped sofas for total comfort.

The yacht also features a cinema, massage room, starboard side beach club, tender access and launching, diving and swimming platform, huge Jacuzzi, and a number of relaxing, entertaining and dining areas both outside and inside. 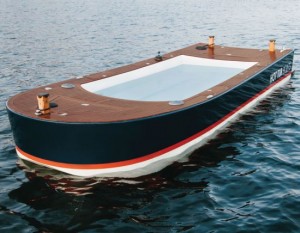 Experience comfort, relaxation and revolving scenery, while being in a hot tub surrounded by water all around, doing drinking, listening music, and leisurely boating with your loved ones, all at once with the revolutionary Hot Tub Boat. Engineered and built in Seattle by a marine carpenter that specializes in custom house boats, this one-of-a-kind vessel is basically an electric boat with an 8-foot long hot tub built into its deck, and positioned on the boat’s center of buoyancy, providing the boat exceptional stability. Ideal for carefree fun and relaxation on the water, moving or stationary, this 16-foot Hot Tub Boat built to accommodate 6 adult bathers, also comes equipped with waterproof stereo system, four ice chests built into the desk, a teak swimstep, and a 24-volt electric motor that propels the boat up to 5 mph on calm water, steered via a joystick. 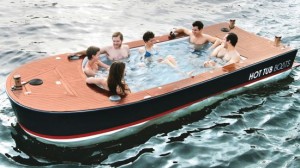 A true jewel in its class, Bravo 88 is a luxury motor yacht with a classic exterior design, impressive lightness, and luxe interiors for up to 8 guests. The vessel can reach speeds of over 25 knots, ensuring a smooth sailing experience and high maneuverability. The composite structure of the yacht provides excellent durability without compromising on weight, which allows for high speeds to be reached almost effortlessly.

A few seconds are enough to go from standstill to fast cruising, and all this happens in total comfort. Talented designers from M. G. Burvenich Yacht Design gave this vessel a hard top flybridge, large windows for unobstructed panoramas in the pilothouse, an elegant yet cozy saloon separated from the luxe aft deck by sliding doors, and a lovely informal dining area as part of the main deck gallery.

Bravo 88 can transport its guests in lavish conditions, offering excellent accommodation in 4 staterooms. The VIP and master suite are flooded with natural light, but the other two cabins are also very impressive in terms of amenities and high-end features. 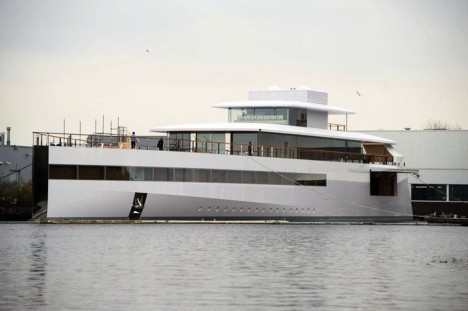 The MSC Preziosa, the upcoming admiral ship of MSC Cruises, will take to the sea in March, boasting the longest water slide ever built on boat.

The ship’s deck 16 will host the Doremi Castle Aqua Park, complete with water jets, fountains and even water pistols.

The park will also boast the longest water-slide ever built on a cruise ship. The aptly named “Vertigo” will tower 13 meters above the deck and the ride is 120 meters long, hurling revellers down the tube at a speed of 6 meters per second.

Anyone shorter than 120 cm will not be allowed on it, for security reasons, but other, less daunting slides will be available for them.

The MSC Preziosa will be christened in Genoa, Italy, on March 23.