The 2013 Pebble Beach Concours d’Elegance and accompanying festivities of the Monterey Car Week and The Quail motorsports gathering concluded Sunday after drawing the finest classic cars, ultra-luxury models and most distinctive vehicles in the world to the beautiful Monterey Peninsula of California. According to some, the events of the Monterey Car Week have been called “tailgating for America’s billionaires” by none other than the nation’s pre-eminent gearhead, Jay Leno, but it has taken years of hard work and a heady mix of automotive iron and stunning Pacific Ocean vistas to keep the world’s wealthy car collectors coming back each year.

The Pebble Beach Concours d’Elegance is the centerpiece of a series of classic car races and auctions, cocktail parties and gatherings for enthusiasts, car shows, and debuts by the world’s most rarified luxury brands like Rolls-Royce, Bentley, Aston Martin and Mercedes-Benz. Rolls-Royce for its part debuted two different vehicles, the 2013 Ghost and the Phantom Coupe Aviator, Cadillac teased a new concept car, and Bentley held the North American debut of the 2013 Continental GT Speed. The Concours d’Elegance and other events of the Monterey Car Week draw such high-value classic cars and luxury debuts every year by means of a very simple formula of strong personalities, an impressive environment and the momentum that years of tradition brings. 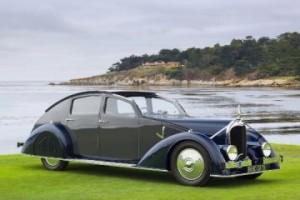