“Pebble Beach is the most beautiful meeting of land and sea in the world,” Petersen Automotive Museum Executive Director Terry Karges said Thursday. The car show and race likewise bring out “the most beautifully designed and built cars in the automotive world.” While Pebble Beach usually plays host to golfers, once a year every August it is taken over by classic cars which are perched precariously on the perfectly manicured green lawns far above the crashing waves of the Pacific Ocean far below.

The Concours d’Elegance is the crown jewel of over a week of auctions, races and parties all over the Monterey Peninsula. The Councours and Monterey Car Week have become their own annual ecosystem in the classic car world as high value and rare vehicles cycle through private collections and auctions. “A lot of people that get to come out as a spectator, and you get to see some of this at our auction, you get to see them [classic cars] more from collection to collection,” Barrett-Jackson Auction Co. chairman and CEO Craig Jackson said Monday.

For many, the Concours d’Elegance and Auto Week are their only opportunity to some ultra-rare vehicles. Several years ago, Pebble Beach succeeded in gathering all six Bugatti Royales, the only time in history they have all been in one place. “It’s a real feat. I don’t think you’ll ever see that again.”

Collectors bring their cars to the Concours each year to win several coveted class and overall awards which boost the prestige, and value, of their cars. “You can count on your hands the number of collectors who have these [Concours d’Elegance winners] in their collections,” Jackson said. However, many of the cars passed through restoration houses like Barrett-Jackson and the auction houses before winding up in private collections and on show at Pebble Beach. “I get to see these cars at Pebble Beach … I’ll remember the car from the ’60s,” Jackson said.

The Pebble Beach Concours d’Elegance has been occurring annually since 1950 and the combination of ultra-rare and classic cars, racing and an incomparable automotive social scene have drawn attendees back year after year. An annual party, Gordon McCall’s Motorworks Revival, at the Monterey Jet Center brings out many of the leading collectors for what Jay Leno has called “tailgating for billionaires,” according to Karges.

“If you didn’t have any other eason to go to Monterey, wouldn’t you want one?” Karges said. The Pebble Beach Concours d’Elegance, races and parties prove to be too much for many wealthy collectors to avoid given the plethora of hotels, lodges and gourmet restaurants that dot the peninsula. “It’s a pilgrimage, literally,” Karges said. Both Karges and Jackson have been attending the Concours d’Elegance for decades. 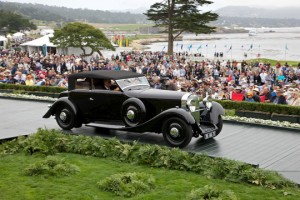