Only 100 units will be produced, each powered by a 5.5-liter V8 engine and equipped with a 7-speed automatic transmission. It features 5-spoke alloy wheels and cool AMG fenders for extra visual appeal. With prices starting at 13,900,000 yen (approx. $140,600,000), the new G550 Night Edition will be exhibited in Roppongi, Tokyo starting April 22.

For the likes of ‘extreme’ heavy duty car fans, the German automaker Mercedes-Benz which recently gave a sneak peek into the future with Ener-G-Force Concept SUV that looks towards future with a quest for the ‘Highway Patrol Vehicle 2025’, has now introduced the G63 AMG SUV in a new format, with a 6×6 drive train, while retaining the luxury aspect of the rugged machine. Targeted at a fixed number of owners, who will be getting a makeover for their premier Mercedes SUVs, this is perhaps the robust, largest and most extreme road-legal SUV vehicle from the house of Mercedes-Benz. Almost resembling a sci-fi movie scene, this SUV is known to travel on road and sand with equal ease. The estimated price tag might just hover around the $457,000 mark, which will be more than triple the U.S.-spec G63 AMG’s $134,300 price tag, and only 20-30 units per year will be made.

Since the most eccentric bunch of Mercedes lovers will perhaps throng for this special edition car, the muscle power added to it truly significant. Under the hood, there is 5.5-litre twin turbo charged V8 engine, which will be dishing out 544 HP of power in output 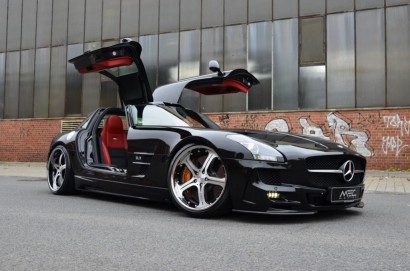 Another upgraded version of the luxury car, Mercedes-Benz SLS AMG Black Series, is now available from MEC Design. The tuners created a very interesting package for the car, and we’re sure they will find many interested customers for this special edition.

The upgrade includes a new carbon body kit with new diffuser, front splitter, side spoiler, and front and rear bumpers. On the inside, the car was fitted with leather-edged floor mats and full carbon fiber trimmings.

The most interesting part, however, can be discovered under the hood. The original output of the supercar was increased to 631 hp. As a final touch, the tuners gave the SLS AMG Black Series a new set of wheels and upgraded suspensions.

This  luxury car would look great in the Men In Black Garage. Check it out!