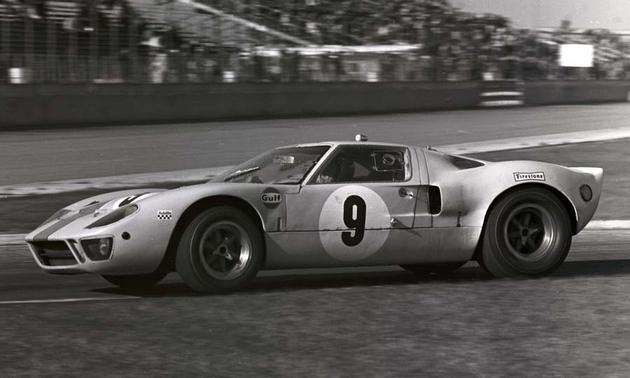 The famous Ford GT40 that made motorsport history on June 15, 1969, will be the centerpiece of the 18th annual Amelia Island Concours d’Elegance’s celebration of the Ford GT40’s 50th anniversary on March 10, 2013.

The Ford GT40 made its Le Mans racing debut June 21, 1964. But it took Ford two years to achieve victory at the world’s most famous endurance race. On June 18, 1966, Ford’s huge investment paid off with a three-car sweep of the race that mattered most to company chief Henry Ford II.

Le Mans 1966 was also revenge for the grandson of the Ford Corp.’s founder. Ford had tried to buy Ferrari in 1962. Ferrari spurned Ford’s third-generation leader at the last moment and Ford commanded a cost-no-object program to defeat Ferrari where it mattered most, the 24 Hours of Le Mans.

There is no public accounting of how much it cost Ford to accomplish the feat, but the records established by Ford’s potent GT40 are well documented. Through three iterations, the Ford GT40 won Le Mans four times in succession: 1966 through 1969.

The most famous GT40 of all made further history on June 15, 1969, when chassis No. 1075, driven by Jacky Ickx and Jackie Oliver, won the 24 Hours of Le Mans a second straight time in less than one year.

This unprecedented motorsport record has its roots in the vagaries of French election law. Voting is mandatory in France and elections were called for Le Mans’ traditional summer date. This compelled the race’s organizing body to postpone the summer endurance classic until September 1968. That sidelined the GT40’s lead racer, Ickx, who had broken his leg during the Canadian Grand Prix one week before Le Mans’ postponed date. The Ford GT40 Ickx had raced to victory at Brands Hatch, Spa and Watkins Glen was entrusted to countryman Lucien Bianchi—who was driving for the injured Brian Redman—and Mexico’s Pedro Rodriguez. That pair won Le Mans in the Ford GT40 that Ickx would soon affectionately call “my car.” As a bonus, the 1968 Le Mans victory also clinched the 1968 International Championship of Makes for Ford.

By 1969, the experts had consigned the 6-year-old Ford GT40 design to spear carrier roles. Then in March, Ickx and Oliver won the punishing 12 Hours of Sebring with the ’68 Le Mans-winning 1075.

The Anglo-Belgian pair teamed for Le Mans again in June, and that race has passed into the legend and lore of international sports car racing. The victory by Ickx and Oliver in 1075 was the closest finish in Le Mans’ long and colorful history: a matter of just 70 yards separated the winning GT40 and the second-place Porsche after 24 hours. The victorious GT40 was almost out of gas and the driver of the Porsche, Hans Herrmann, thought his brakes were fading. For the final two hours, the pair ground around the high-speed 8.369-mile French road circuit, often at more than 200 mph, laying plans for the final lap.

The new Porsche 908 and the aging Ford GT40, 1075, that had won Le Mans just nine months earlier, were locked in a game of high-speed, high-stakes Le Mans-chess. The Porsche was faster on the long Mulsanne straight, but the Ford was quicker from the Mulsanne hairpin back to the starting line. The pair arrived at the finish line just 15 seconds before 2 p.m., the race’s appointed finishing hour. Both would have to make another agonizing yet fast and perfect lap. As the other cars were flagged off the track at 2 p.m., only the battling lead duo remained on the course, adding to the drama and tension of that last long lap.

In America, ABC television was making its first live broadcast of the 24 Hours of Le Mans. Amelia Concours founder and chairman Bill Warner remembers the final lap as Wide World of Sports‘ host Jim McKay and three-time Le Mans winner and world driving champion Phil Hill made the call of the finish. “Seeing Le Mans live for the first time on American television was amazing. By the time they got to Arnage on the last lap, it was obvious that the GT40 was going to win. At the flag, the GT40 and the Porsche were less than two seconds apart.

“Having the first of only three cars to win Le Mans twice on the Amelia Concours field is a thrill for me,” said Warner. “I remember photographing these cars at Sebring and Daytona in 1969 when 1075 won the 12 Hours, and recall thinking what a great Anglo/American effort it was.”

On March 10, 2013, Ford GT40 1075 and its Gulf racing stalemates GT40 1076 (that finished third at Le Mans in ’69 driven by David Hobbs and Mike Hailwood) and 1074 will be reunited on the fairways of The Golf Club at Summer Beach in the 18th annual Amelia Island Concours d’Elegance to celebrate the 50th anniversary of the creation of the Ford GT40.