Named after one of the fastest, strongest and most aggressive fighting bulls ever, here’s an ultra-exclusive Lamborghini Veneno, a road-going Italian super sports car and racing prototype which will celebrate its first-ever public appearance at the 2013 Geneva Motor Show as a tribute to the Automobili Lamborghini’s 50th anniversary. Limited to just 3 unique examples to be built and sold for as much as $3.9 million, the Lamborghini Veneno boasts a design focused on optimum aerodynamics and cornering stability, giving this powerful machine the real dynamic experience of a racing prototype, yet making it fully homologated for the road. After already being sold to customers at a price of $3.9 million, this street-legal racing car becomes the world’s most expensive Lamborghini which with a maximum output of 552 kW / 750 hp accelerates from 0 to 100 km/h in a whip of 2.8 seconds, while offering the top speed of 355 km/h. 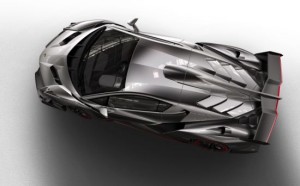