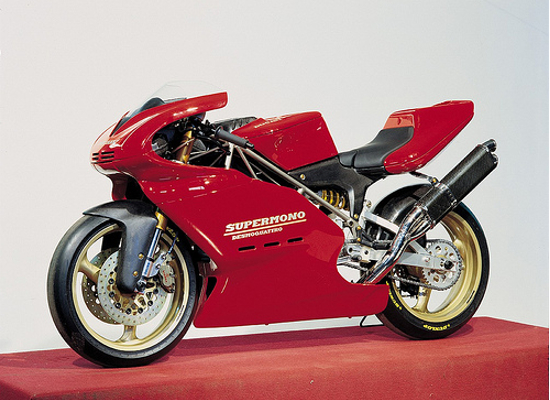 For those who have a fetish for ultra-powerful 2 wheelers, Ducati needs no real introduction. Perhaps thats the reason, why even pre-owned older models from the bike maker, sends a frenzy among the collectors world wide. In other words, its like a ‘badge of honor’ to own a Ducati. Now an 1990’s production of the Ducati Supermono for grabs via Car and Classic, UK where the asking price tag is $150,000. This bike holds a special meaning for the lovers of the bike brand, because it was a limited edition of just 67 units, and was largely taken to be one of the best during its era.

From conceptual expertise of Pierre Terblanche, with the engineering and technical finesse of Massimo Bordi and Claudio Domenicali, came out this unadulterated racer bike which boasted of a 550cc 65HP engine, and a dry weight of barely 118kg. It was primarily target as the racing star of the Sound of Singles series of the 90’s, for which this specially crafted water cooled 4-valve engine was put together, also noted for the fuel injected single cylinder construction. The transmission was controlled by the 6-speed gearbox of the engine, which helped getting out the 220 kmph of top speed.