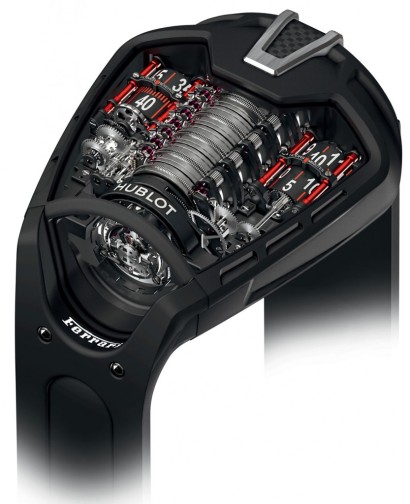 Created as a tribute to the new and amazing LaFerrari supercar, this amazing looking watch from Hublot is a true stunner in all respects. Aside from its awesome design, the new MP-05 LaFerrari watch boasts a series of technical features that will impress all connoisseurs.

This here is the world’s first hand-wound tourbillon wristwatch to boast a power reserve of 50 days! It was designed, developed and manufactured entirely by Hublot’s watchmakers and engineers, and it flaunts the highest number of watchmaking components ever used by the fabled Swiss enterprise for one movement – 637, of which 108 are jewels.

A total of eleven series-coupled barrels make up what seems to be the timepiece’s spinal column, and they work together to ensure its the record power reserve. They can be admired thorough a uniquely shaped sapphire crystal which was obviously inspired by the dynamic design of the LaFerrari. The crown is integrated into the design of the case so that it doesn’t stand out.

On the right side of the barrels the time is displayed on anodized black aluminum cylinders (one for the hours, one for the minutes). The left side was kept for the power reserve cylinder. The case is made of black PVD titanium, just like the folding buckle, while the strap is black rubber. Only 50 numbered units will ever be produced, at a price of $300,000 each.

The 2013 Geneva Auto Show is proving to be another hotbed for technology and automobile geeks, where the bigger guys are putting up quite a show to outdo each other. If owning a Ferrari wasn’t just good enough; now the Ferrari FF will sport iPad integration feature in its setup. The 2013 edition of the supercar will also feature the additional benefit of having Siri eyes free integration while taking a ride in the backseat of the vehicle. The iPads will be fixed into the front seat headrests, where users can surf and control all their multimedia content via Apple’s ‘Siri’ programme, thus making the already thrilling ride in a Ferrari a step more tech friendly.

This setup wasn’t completed in a day. The chief of Apple’s software and services group Eddie Cue led a crucial role in ensuring that the new Ferrari FF sports this additional feature. Last year when Luca di Mentezemolo and Tim Cook sat down for doing something together, their mission was clear and something of this sort was always on the cards, which finally has manifested itself in the form of this upgrade in the Ferrari FF. And if the word is to be believed, this isn’t the end of it. We are still in the earlier half of 2013, and official statements say that Apple and Ferrari will be working on a large number of products together.